There are so many wide receivers that have a lot of fantasy value going into this season. Below is a list of the top 15 fantasy wide receiver options for this year’s fantasy drafts. Some notable names not on the list include: DeVante Parker, A.J. Brown, Julian Edelman, Tyler Lockett, D.J. Chark, Courtland Sutton, Stefon Diggs, Jarvis Landry, D.J. Moore, A.J. Green and others.

Analysis: Three seasons in a row, Allen has surpassed 1,100 receiving yards. He has been one of the most reliable fantasy options during that tenure, and he is a safe pick this year as well. Even though the Chargers’ quarterback may change throughout the season, Allen will still more than likely lead his team in receiving. He should produce more numbers with rookie quarterback, Justin Herbert, starting over Tyrod Taylor. Herbert has a better arm, and Taylor is more of a dink-and-dunk scrambling quarterback. Although Allen’s stock may seem down, he is the biggest playmaker on this offense. Offensive coordinator, Shane Steichen, will look for ways to get his best offensive player the ball this season. 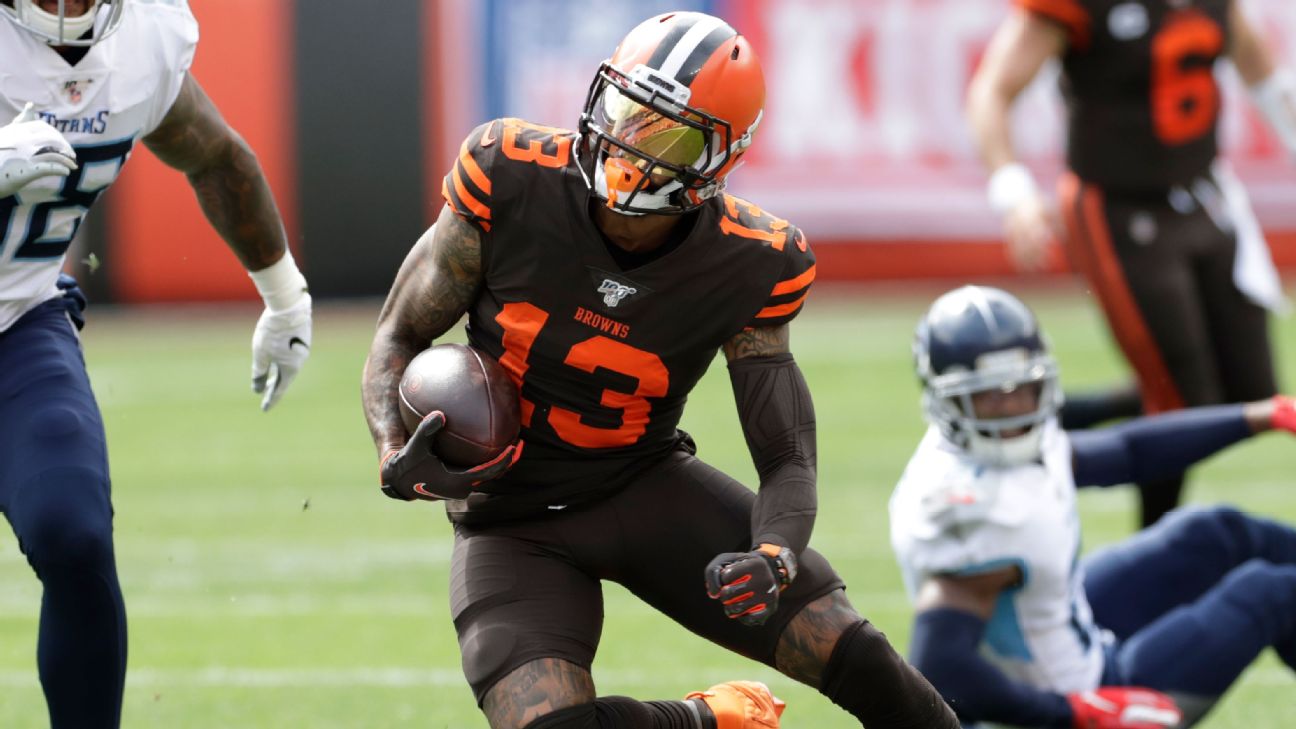 Analysis: In his first season with Cleveland, Beckham Jr. put up just over 1,000 yards receiving with four touchdowns, but fantasy owners were expecting more. He finished 31st among fantasy receivers last year, and he wasn’t even the best receiver on his team (Landry finished 14th). Expect the roles to flip this season. Landry isn’t as consistent as OBJ is throughout his career. Both players entered the league in 2014. Since then, OBJ has only 323 more receiving yards than his teammate, but he has scored 16 more times. OBJ should become Baker Mayfield’s top red zone option entering the 2020 season, so expect more touchdowns from the former All-Pro receiver. 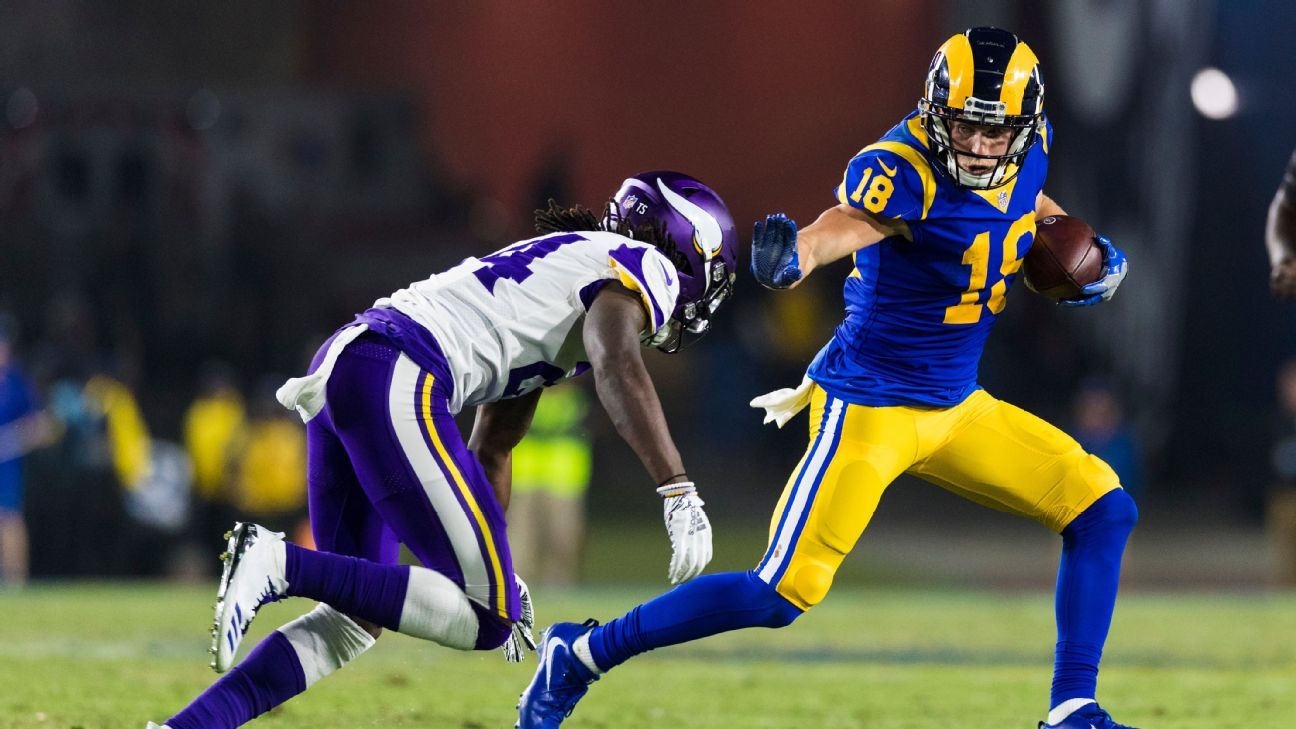 Analysis: Kupp is coming off his best season as a pro finishing with 94 receptions for 1,161 yards, and he was tied for second in the league with 10 receiving touchdowns. Even though his quarterback, Jared Goff, had a down year, he still threw for a ton of yards. He should continue to do so, and he should continue to feed the speedy wide receiver. The departure of Brandin Cooks to Houston opens up more opportunities for Kupp and Robert Woods. Expect Kupp to use his speed to make a lot of big plays this season. Goff surely isn’t afraid to let loose and target him deep down the field.

Analysis: The 6th-year standout wide receiver is coming off his best season yet. Cooper led Dallas in every receiving category: receptions (77), targets (119), yards (1,189) and touchdowns (8). His stats were good enough to rank him 7th out of all fantasy wide receivers. This season, he should see a decline in numbers, but it shouldn’t be as drastic as some may think. Yes, Dallas went out and drafted CeeDee Lamb in the first round of the NFL Draft, but Cooper is still going to be the top option for Dak Prescott. If anything, he will see similar numbers and Michael Gallup’s numbers will decline. Cooper will be a good WR1 option for your fantasy teams, and if he slips, he will be an amazing WR2 option at the least. Analysis: This may seem low to some, but Godwin’s numbers last season are hard to sustain. He finished 2nd among fantasy wide receivers, and it was by far his best season as a pro. From the season prior, Godwin had 491 more receiving yards and 2 more touchdowns in 2019. With a new quarterback (The GOAT) and another huge red zone target (Gronk), expect Godwin’s touchdowns to go down this season. He should still see a ton of targets, and he should still be near the top of the league in receiving yards. He just might be third in receiving touchdowns on his own team. 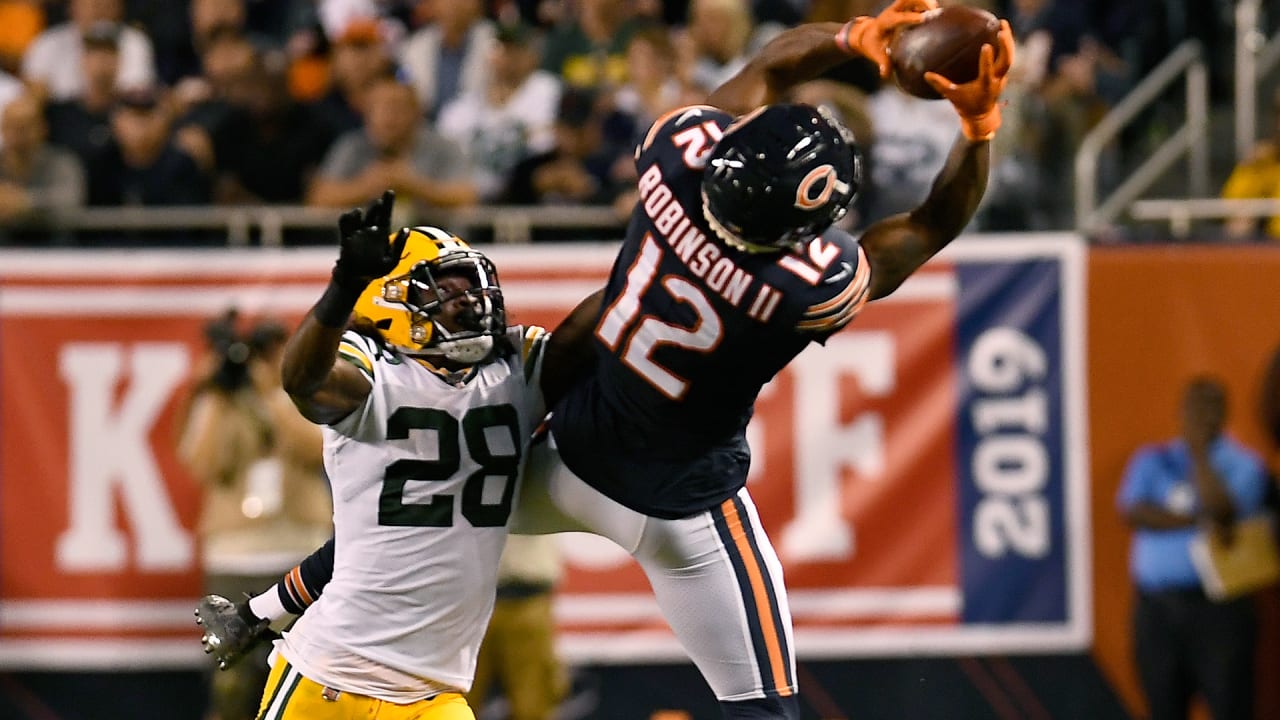 Analysis: Three years after suffering a torn ACL, Allen Robinson has become one of the best wide receivers in this league again. He finished with a career best 98 receptions last season to go along with 1,147 yards and 7 touchdowns. The most impressive part is that Robinson accomplished this with very mediocre quarterback play throughout the whole season. The 26-year-old has been thriving ever since he joined Chicago in 2018. His production should be even higher this season. Chicago has a very questionable receiving group surrounding A-Rob, and the rest of the offense is a big question mark as well. Whomever the quarterback is this season, Robinson will be heavily targeted. The standout wide receiver is also going into his contract year, so expect him to be hungry looking for a larger contract.

Analysis: Last season, Thielen missed time due to injury, and he was never really the same when he came back. Stefon Diggs took over as the for sure number one option for Kirk Cousins, but he was shipped out to Buffalo in a trade he pretty much asked for. Minnesota did draft former LSU standout receiver, Justin Jefferson, to replace Diggs. Thielen should carry most of the load now, and he has shown that he can be the number one option. Two seasons ago, he led Minnesota in receiving with 1,373 yards and 9 touchdowns. Expect Thielen to have a similar season simply because Diggs is gone.

Analysis: Possibly the fastest player on this list. Cheetah missed four games last season, and he still finished 28th among fantasy receivers. If fully healthy, Tyreek Hill should see a ton of targets and a ton of yards. His elite upside on this dangerously fast offense should translate into a lot of big plays for him this season. The only thing that separates the rest of this list and him is that he lacks the red zone targets. He’s not the tallest guy on the field, but he surely makes up for it with his elite jumping ability. Tight end, Travis Kelce, will receive most of the red zone targets, but Hill should still be a fine WR1 option for your fantasy team(s). 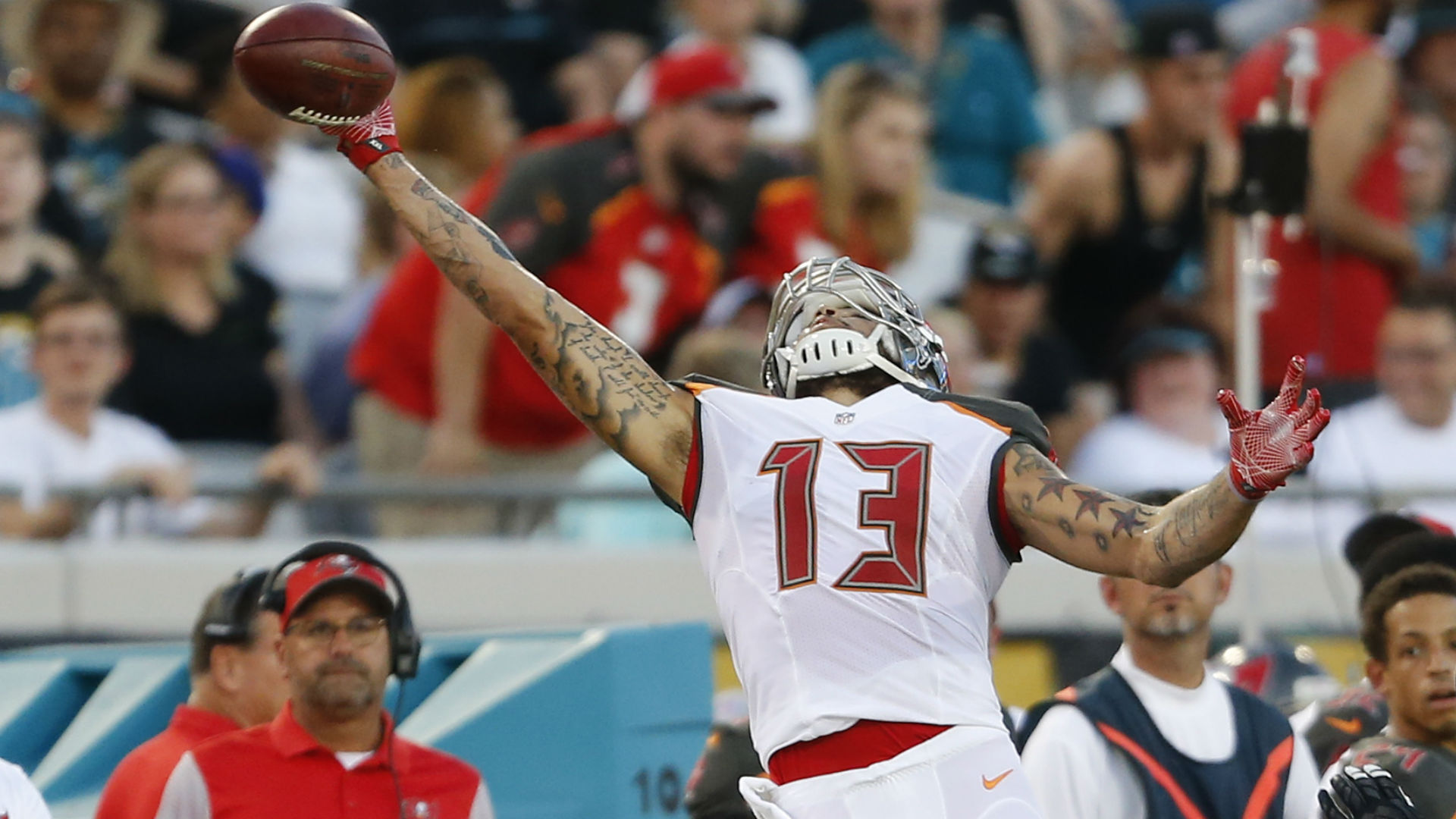 Analysis: In his six seasons in the league, Evans has gone over 1,000 yards in each season, respectively. Last season, he did so with only 67 receptions. He should see around 120 targets again, but expect him to catch more of those targets this season. He is a big body that should dominate in the red zone with Tom Brady throwing him the rock. Expect more receptions, more yards and more touchdowns this season from Evans. He is too good to not be the number one receiver option on his own team. Brady will learn to trust him right away. If Brady trusts you, he will make sure you play like a star.

Analysis: Hopkins was involved in a trade that shocked everyone as he was shipped to Arizona after not agreeing on a contract extension with Houston. He joins a young team led by second-year quarterback, Kyler Murray. The All-Pro receiver is known to be a very valuable fantasy wide receiver throughout his career. He has finished in the top 10 for fantasy wide receivers the past three seasons. Nuk is a very safe choice, and should have no problem putting up similar numbers this season with Arizona. Expect Hopkins to lead the team in targets, receiving yards and receiving touchdowns. The only reason why he isn’t higher on this list is because he is on a team that has a great amount of depth at the receiver position (Fitzgerald, Isabella, Kirk, Butler). 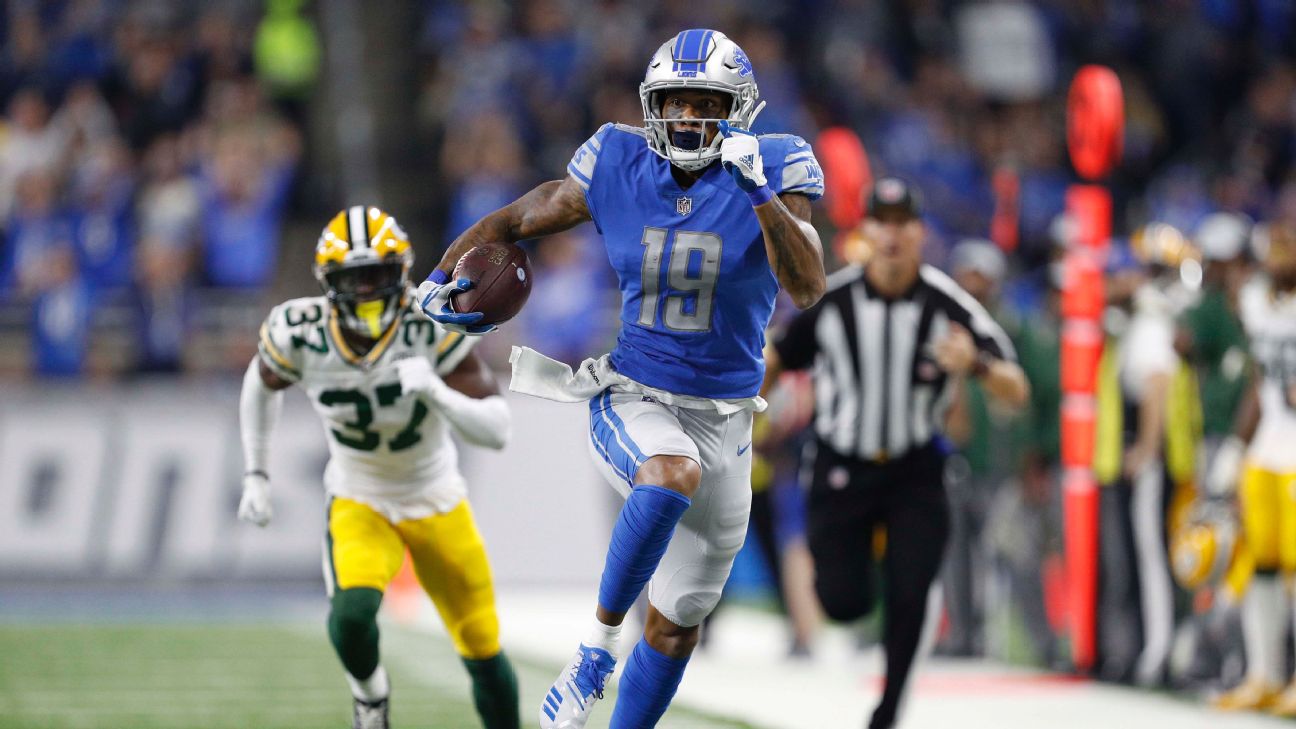 Analysis: Golladay led the league in receiving touchdowns last season with 11. Imagine if Matthew Stafford was throwing him the ball all season. With a healthy Stafford and a better running game, Golladay should see even more opportunities this season. He finished third last season among fantasy wide receivers, and he sits one spot lower because Marvin Jones is still on the team. Jones should take away some of Golladay’s red zone targets just because Stafford loves to throw to Jones in the red zone. Golladay is still a great WR1 option for this season, and he should be towards the top of the league in fantasy yards. If Stafford stays healthy, Golladay should have no problem producing great numbers. He even proved he could do so without his starting quarterback. 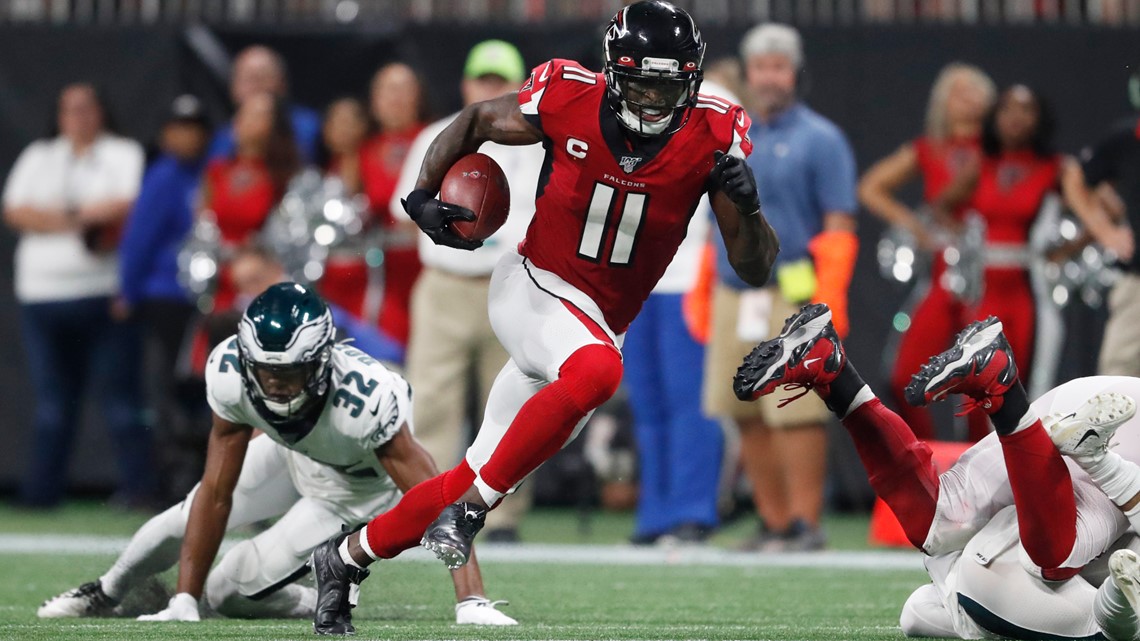 Analysis: Jones quietly finished second in the league last season in receiving yards (1,394). He also finished fifth among wide receivers in fantasy points. Matt Ryan loves throwing him the ball, and he is a great down-the-field threat. The departure of tight end, Austin Hooper, should open up more red zone opportunities for Jones this season. Expect his receiving yards to dip a little bit with Calvin Ridley entering his third season with Atlanta. The future Hall of Famer should have another fine year where he finishes top 5 in fantasy points among wide receivers. 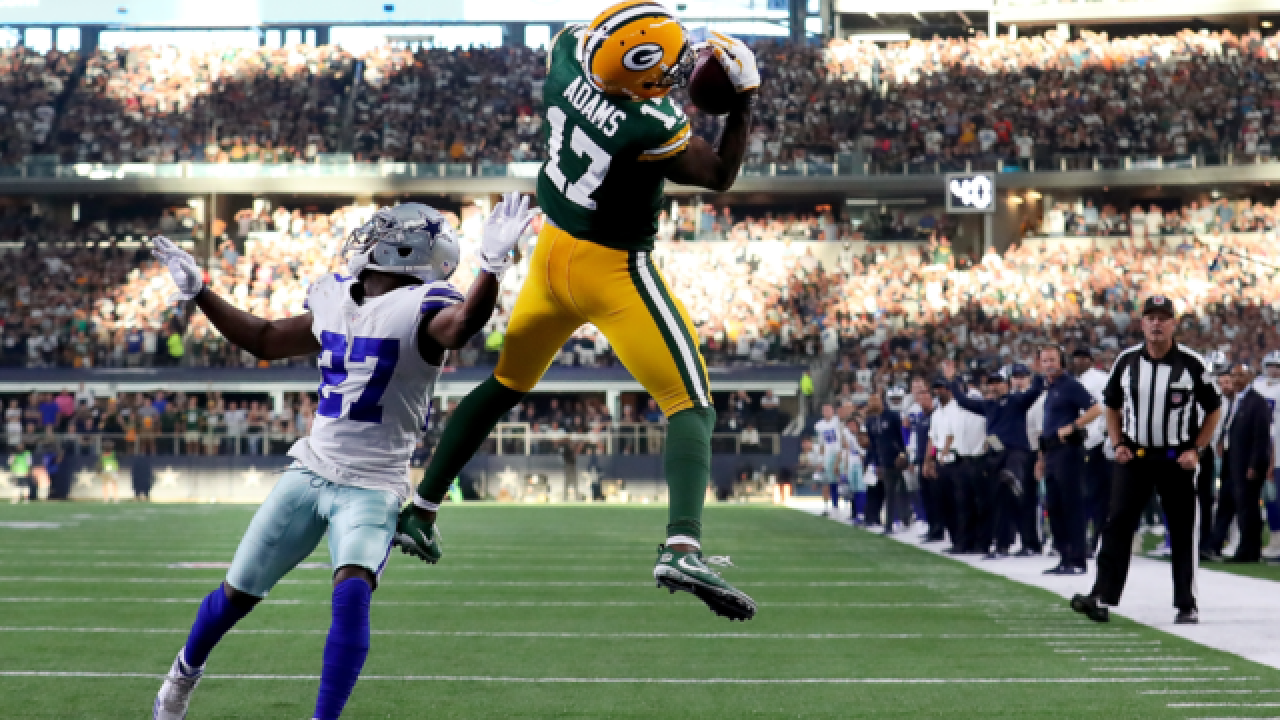 Analysis: Adams’ value remains one of the best in the league for fantasy wide receivers. Thanks to Green Bay avoiding their wide receiver depth needs in the NFL Draft this offseason, Aaron Rodgers will rely on Adams even more this season. Former starting tight end, Jimmy Graham, left and signed with their NFC North rival, Chicago Bears this offseason. Devin Funchess came in to battle for a starting position, but outside Adams, there isn’t a for sure threat in the receiving room. The 27-year-old has been one of the more consistent wide receivers in the past few years. Last season, he finished 997 receiving yards and 5 touchdowns in just 12 games. Coming into this season healthy, he should put up monster numbers. Adams is a lock for a WR1 spot on any fantasy team this season. 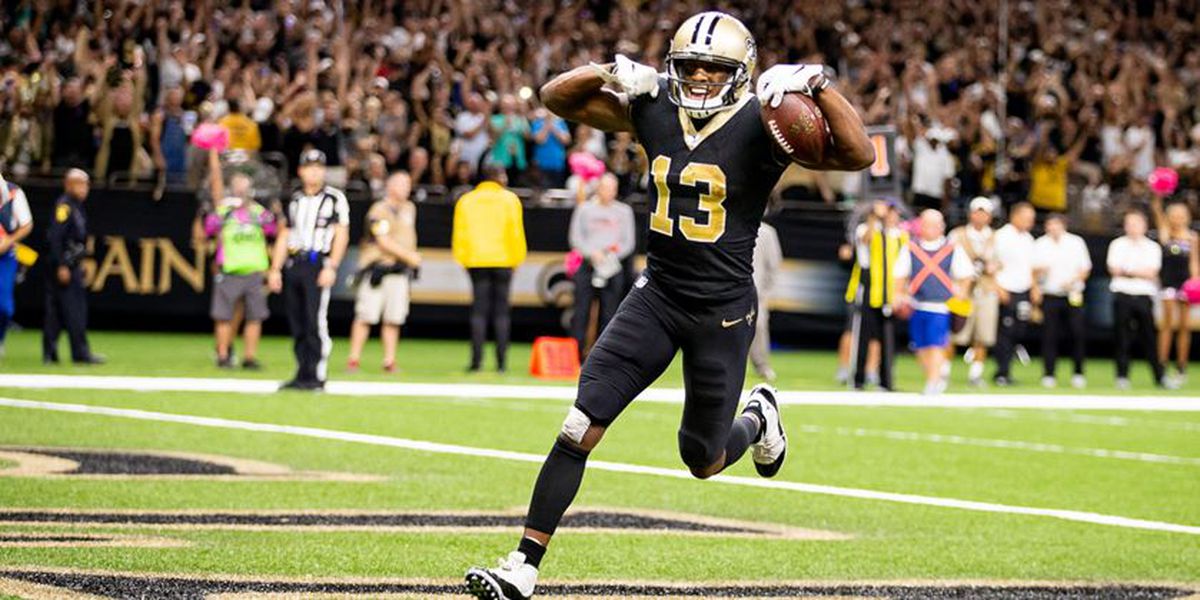 Analysis: The All-Pro receiver is coming off a historic season where he passed Marvin Harrison for the most receptions in a single season with 149. He also finished with an amazing 1,725 yards and 9 touchdowns. He finished first among fantasy wide receivers last season, and it wasn’t even close. Thomas is the clear-cut favorite to be the number one fantasy wide receiver this season, and there are no signs showing why he wouldn’t repeat. Even when Teddy Bridgewater filled in for the injured Drew Brees, Thomas continued to dominate. He is a one-of-a-kind receiver who can do it all. He had one of the best seasons from a wide receiver of all-time last season, and he should be just as dominant this season.